What You Need To Know

Thessaloniki  is the second-largest city in Greece and the capital of Greek Macedonia, the administrative region of Central Macedonia and the Decentralized Administration of Macedonia and Thrace. Its nickname is η Συμπρωτεύουσα (Symprotévousa), literally “the co-capital”, a reference to its historical status as the Συμβασιλεύουσα (Symvasilévousa) or “co-reigning” city of the Eastern Roman (Byzantine) Empire, alongside Constantinople. The municipality of Thessaloniki, the historical center, had a population of 325,182 in 2011, while the Thessaloniki Urban Area had a population of 788,952. and the Thessaloniki Metropolitan Area had 1,012,297 inhabitants in 2011. Thessaloniki is Greece’s second major economic, industrial, commercial and political centre, and a major transportation hub for the rest of southeastern Europe; its commercial port is also of great importance for Greece and the southeastern European hinterland. The city is renowned for its festivals, events and vibrant cultural life in general, and is considered to be Greece’s cultural capital. Events such as the Thessaloniki International Trade Fair, the Thessaloniki International Film Festival, and the Thessaloniki Song Festival are held annually, while the city also hosts the largest bi-annual meeting of the Greek diaspora. Thessaloniki was the 2014 European Youth Capital. The city of Thessaloniki was founded in 315 BC by Cassander of Macedon. An important metropolis by the Roman period, Thessaloniki was the second largest and wealthiest city of the Byzantine Empire. It was conquered by the Ottomans in 1430, and passed from the Ottoman Empire to modern Greece on 8 November 1912. Thessaloniki is home to numerous notable Byzantine monuments, including the Paleochristian and Byzantine monuments of Thessaloniki, a UNESCO World Heritage Site, as well as several Roman, Ottoman and Sephardic Jewish structures. The city’s main university, Aristotle University, is the largest in Greece and the Balkans. Thessaloniki is a popular tourist destination in Greece. For 2013, National Geographic Magazine included Thessaloniki in its top tourist destinations worldwide, while in 2014 Financial Times FDI magazine (Foreign Direct Investments) declared Thessaloniki as the best mid-sized European city of the future for human capital and lifestyle. Among street photographers, the center of Thessaloniki is also considered the most popular destination for street photography in Greece.

Typical architecture of the “Ano Poli” (Upper Town) district Ano Poli (also called Old Town and literally the Upper Town) is the heritage listed district north of Thessaloniki’s city center that was not engulfed by the great fire of 1917 and was declared a UNESCO World Heritage Site by ministerial actions of Melina Merkouri, during the 1980s. It consists of Thessaloniki’s most traditional part of the city, still featuring small stone paved streets, old squares and homes featuring old Greek and Ottoman architecture. Ano Poli also, is the highest point in Thessaloniki and as such, is the location of the city’s acropolis, its Byzantine fort, the Heptapyrgion, a large portion of the city’s remaining walls, and with many of its additional Ottoman and Byzantine structures still standing. The area provides access to the Seich Sou Forest National Park and features panoramic views of the whole city and the Thermaic Gulf. On clear days Mount Olympus, at about 100 km (62 mi) away across the gulf, can also be seen towering the horizon. 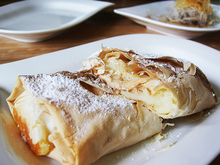 Bougatsa, typical Thessalonian treat. Because Thessaloniki remained under Ottoman rule for about 100 years more than southern Greece, it has retained a lot of its Eastern character, including its culinary tastes. Spices in particular play an important role in the cuisine of Thessaloniki, something which is not true to the same degree about Greece’s southern regions. Thessaloniki’s Ladadika borough is a particularly busy area in regards to Thessalonian cuisine, with most tavernas serving traditional meze and other such culinary delights. Bougatsa, a breakfast pastry, is very popular throughout the city and has spread around other parts of Greece and the Balkans as well. Another popular snack is koulouri. Notable sweets of the city are Trigona, Roxakia and Armenovil. A stereotypical Thessalonian coffee drink is Frappé coffee. Frappé was invented in the Thessaloniki International Trade Fair in 1957 and has since spread throughout Greece and Cyprus to become a hallmark of the Greek coffee culture.

Thessaloniki rose to economic prominence as a major economic hub in the Balkans during the years of the Roman Empire. The Pax Romana and the city’s strategic position allowed for the facilitation of trade between Rome and Byzantium (later Constantinople and now Istanbul) through Thessaloniki by means of the Via Egnatia. The Via Egnatia also functioned as an important line of communication between the Roman Empire and the nations of Asia, particularly in relation to the Silk Road. With the partition of the Roman Emp. into East (Byzantine) and West, Thessaloniki became the second-largest city of the Eastern Roman Empire after New Rome (Constantinople) in terms of economic might.Under the Empire, Thessaloniki was the largest port in the Balkans. As the city passed from Byzantium to the Republic of Venice in 1423, it was subsequently conquered by the Ottoman Empire. Under Ottoman rule the city retained its position as the most important trading hub in the Balkans. Manufacturing, shipping and trade were the most important components of the city’s economy during the Ottoman period, and the majority of the city’s trade at the time was controlled by ethnic Greeks. Historically important industries for the economy of Thessaloniki included tobacco (in 1946 35{127ef621661ad6f5f2782e09270d7e462786ee286298483f89bbb50ebd68ecc6} of all tobacco companies in Greece were headquartered in the city, and 44{127ef621661ad6f5f2782e09270d7e462786ee286298483f89bbb50ebd68ecc6} in 1979) and banking (in Ottoman years Thessaloniki was a major center for investment from western Europe, with the Bank of Thessaloniki (French: Banque de Salonique) having a capital of 20 million French francs in 1909).

Conference with John Malkovich and Georges Corraface, current president of the International Film Festival. Thessaloniki is home of a number of festivals and events. The Thessaloniki International Trade Fair is the most important event to be hosted in the city annually, by means of economic development. It was first established in 1926 and takes place every year at the 180,000 m2 (1,937,503.88 sq ft) Thessaloniki International Exhibition Center. The event attracts major political attention and it is customary for the Prime Minister of Greece to outline his administration’s policies for the next year, during event. Over 250,000 visitors attended the exposition in 2010. The new Art Thessaloniki, is starting first time 29.10. – 1 November 2015 as an international contemporary art fair. The Thessaloniki International Film Festival is established as one of the most important film festivals in Southern Europe, with a number of notable film makers such as Francis Ford Coppola, Faye Dunaway, Catherine Deneuve, Irene Papas and Fatih Akın taking part, and was established in 1960. The Documentary Festival, founded in 1999, has focused on documentaries that explore global social and cultural developments, with many of the films presented being candidates for FIPRESCI and Audience Awards. 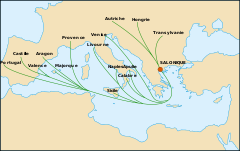 Paths of Jewish immigration to the city. The Jewish population in Greece is the oldest in mainland Europe (see Romaniotes). When Paul the Apostle came in Thessaloniki he taught in the area of what today is called Upper City. Later, during the Ottoman period, with the coming of Sephardic Jews from Spain, the community of Thessaloniki became mostly Sephardic. Thessaloniki became the largest center in Europe of the Sephardic Jews, who nicknamed the city la madre de Israel (Israel’s mother)and “Jerusalem of the Balkans”. It also included the historically significant and ancient Greek-speaking Romaniote community. During the Ottoman era, Thessaloniki’s Sephardic community comprised more than half the city’s population; Jewish merchants were prominent in commerce until the ethnic Greek population increased after independence in 1912. By the 1680s, about 300 families of Sephardic Jews, followers of Sabbatai Zevi, had converted to Islam, becoming a sect known as the Dönmeh (convert), and migrated to Salonika, whose population was majority Jewish. They established an active community that thrived for about 250 years. Many of their descendants later became prominent in trade. Many Jewish inhabitants of Thessaloniki spoke Ladino, the Romance language of the Sephardic Jews.

Greek is the Official language.

Thessaloniki is served by buses. The bus company operating in the city is the Thessaloniki Urban Transport Organization (OASTH) and is the only public means of transport in Thessaloniki at the moment. It operates a fleet of 604 vehicles on 75 routes throughout the Thessaloniki Metropolitan Area. International and regional bus links are provided by KTEL at its Macedonia InterCity Bus Terminal, located to the west of the city centre.

The construction of the Thessaloniki Metropolitan Railway began in 2006 and is scheduled for completion in 2018, where it is set to become the city’s most vital public transport service. The line of Phase 1 is set to extend over 9.6 kilometres (6.0 mi), include 13 stations and it is expected to eventually serve 250,000 passengers daily. Some stations of the Thessaloniki Metro will house a number of archaeological finds.

Commuter rail services have recently been established between Thessaloniki and the city of Larissa (the service is known in Greek as the “Proastiakos”, meaning “Suburban Railway”). The service is operated using Siemens Desiro EMU trains on a modernised electrified double track and stops at 11 refurbished stations, covering the journey in 1 hour and 33 minutes. Furthermore, an additional line has also been established, although with the use of regional trains, between Thessaloniki and the city of Edessa.

Thessaloniki lies on the crossroads of the A1/E75, A2/E90 and A25 motorways; which connect the city with other parts of the country, as well as the Republic of Macedonia, Bulgaria and Turkey.

Because of the Greek economic crisis, all international train links from the city were suspended in February 2011. Until then, the city was a major railway hub for the Balkans, with direct connections to Sofia, Skopje, Belgrade, Moscow, Vienna, Budapest, Bucharest and Istanbul, alongside Athens and other destinations in Greece. Daily through trains to Sofia and Belgrade were restarted in May 2014. Thessaloniki remains one of Greece’s most important railway hubs and has the biggest marshalling yard in the country.

Thessaloniki’s climate is directly affected by the sea it is situated on.The city lies in a transitional climatic zone, so its climate displays characteristics of several climates. According to the Köppen climate classification, it ias a humid subtropical climate (Cfa) that borders on a Mediterranean climate (Csa), as well as a semi-arid climate (BSk), observed on the periphery of the region. With annual average precipitation of 450 mm (17.7 inches) due to the Pindusrain shadow drying the westerly winds. However, the city has a summer precipitation between 20 to 30 mm (0.79 to 1.18 inches), which is prevents it being qualified as a Mediterranean climate (Csa), and increases gradually towards the north and west, turning humid subtropical. Winters are relatively dry, with common morning frost. Snowfalls are sporadic, but οccur more or less every winter, but the snow cover does not last for more than a few days. Fog is common, with an average of 193 foggy days in a year. During the coldest winters, temperatures can drop to −10 °C (14 °F). The record minimum temperature in Thessaloniki was −14 °C (7 °F). On average, Thessaloniki experiences frost (sub-zero temperature) 32 days a year. The coldest month of the year in the city is January, with an average 24-hour temperature of 6 °C (43 °F). Wind is also usual in the winter months, with December and January having an average wind speed of 26 km/h (16 mph). Thessaloniki’s summers are hot with rather humid nights. Maximum temperatures usually rise above 30 °C (86 °F), but rarely go over 40 °C (104 °F); the average number of days the temperature is above 32 °C (90 °F) is 32.The maximum recorded temperature in the city was 42 °C (108 °F). Rain seldom falls in summer, mainly during thunderstorms. In the summer months Thessaloniki also experiences strong heat waves. The hottest month of the year in the city is July, with an average 24-hour temperature of 26 °C (79 °F). The average wind speed for June and July in Thessaloniki is 20 kilometres per hour (12 mph).